The RIAS 2012 and RIBA 2012 award winning Scottish National Portrait Gallery (SNPG) reopened its doors recently after a two-and-a-half year makeover. The external and internal works were carried out by a design team led by Page \ Park Architects.

Located on Queen Street, Edinburgh, the SNPG is an art museum holding national collections of portraits of Scots. The building was originally designed by Robert Rowand Anderson (other notable buildings include McEwan Hall, Edinburgh and Mount Stuart House, Bute) who trained under George Gilbert Scott (whose famous buildings include The Midland Grand Hotel, St. Pancras Station).

Revival of a Goth
Getting off the train at Waverley Station, the visitor climbs Waverley Steps. Once at the summit, you are at the heart of the retail core of Edinburgh; Princes Street. With the mess that the local authority has got itself into (i.e. the Edinburgh Tram debacle), ones arrival is greeted with the throng of bodies cramming onto whatever bit of pavement that is left, either to halt an oncoming bus or attempting to negotiate the traffic in crossing to the northern side of Princes Street. 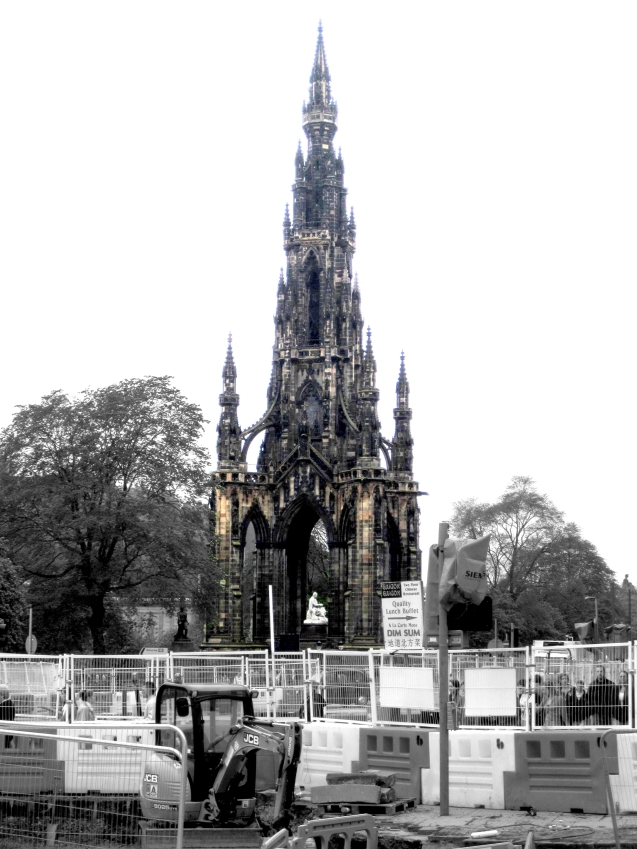 Amidst the chaos, one of the prominent structures in Edinburgh looms over the passersby. The Scott Monument towers over Princes Street, looking like a structure that had landed in the distant past from Cybertron. Designed as a Victorian Gothic monument to Sir Walter Scott, the structure is one of the very few gothic structures in what is a predominantly classically styled Edinburgh. 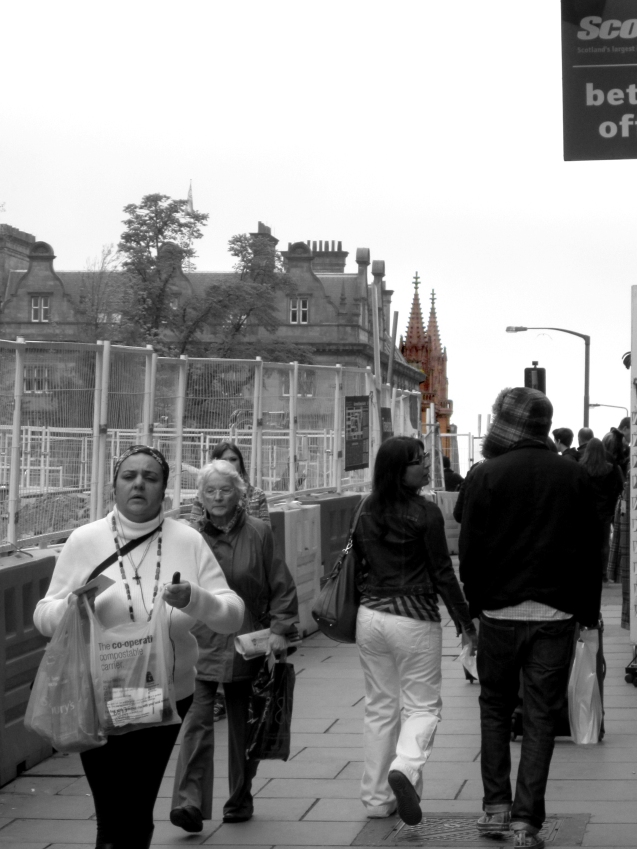 Glimpse of eastern corner of SNPG

One of these is the SNPG itself. Approaching from South St. Andrew Street, one catches a glimpse of the eastern corner of the building, the finial not dissimilar to that of Scott Monument. In a sense, the building is something which is, in its form and material, quite alien to the classically inspired and blond-sandstone dominated Athens of the North. Anderson’s red sandstone Gothic revival building dominates almost an entire length of an Edinburgh New Town block along Queen Street. Located on a north-facing slope, the building is situated in an ideal location for harbouring a mass collection of light-sensitive portraits.

Arriving on Queen Street, the existing pavement width fronting the SNPG has been extended to follow the line of adjacent blocks. This has resulted in a three-fold improvement to the public realm. Firstly, it allows a more generous pavement for a higher volume of pedestrian movement at peak times. Secondly, this allows the public to step back and better enjoy the external appearance of the building after the ‘facelift’ through careful stone conservation. Lastly, the widening has given more room to address the disabled access into the building (the internal ground floor level being higher than external pavement level). Gentle ramps grow out of the ground as if tectonic plates had collided to pave the way for all citizens arriving at the entrance lobby. 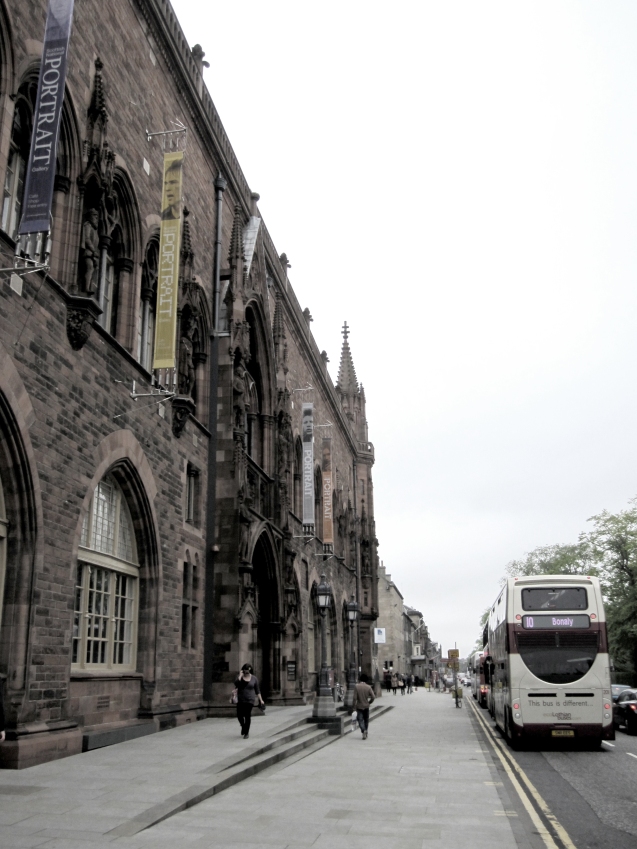 Arriving at the entrance lobby, the visitor is given three options; to carry on through another set of double doors into the Great Hall (which used to be the original lobby), venture left into a gallery space and access the lift, or turn right past the information centre into the shop and cafe space beyond. The size of the new entrance lobby is akin to a ‘decompression chamber’. Albeit small, it is adequate enough so as to allow the visitor enough time to dwell, orientate and move. The signage is adequate such that it doesn’t bombard you with unnecessary and lengthy information at the entrance but good enough to direct you to where you can get more info if you need it. This clever way of dispersing foot traffic early-on means that it avoids bottlenecks and congestion at the entrance lobby and more importantly, frees up the Great Hall to become an ‘exhibition’ space in itself. Moving from the lobby, the contemporary gallery, shop & cafe as well as Great Hall greet the visitor with airy double height spaces. 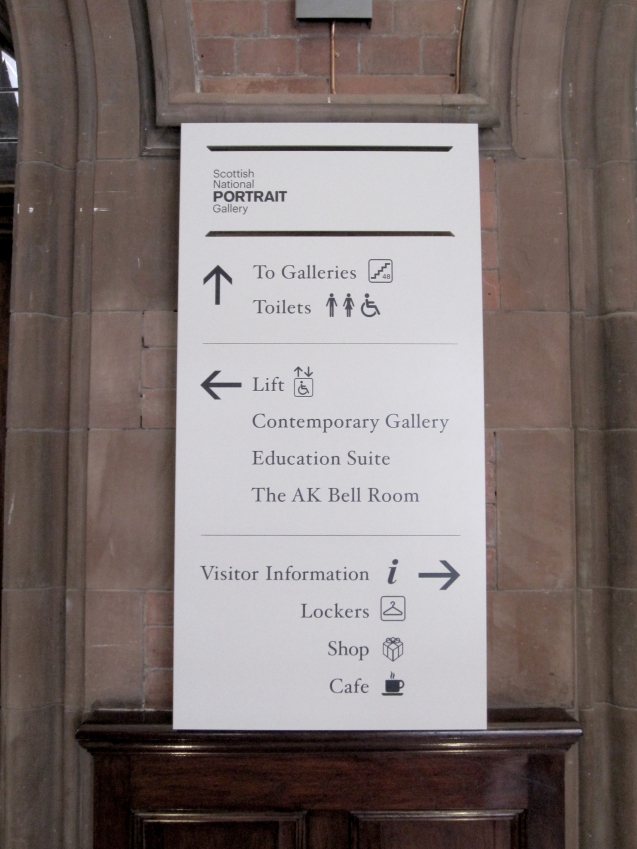 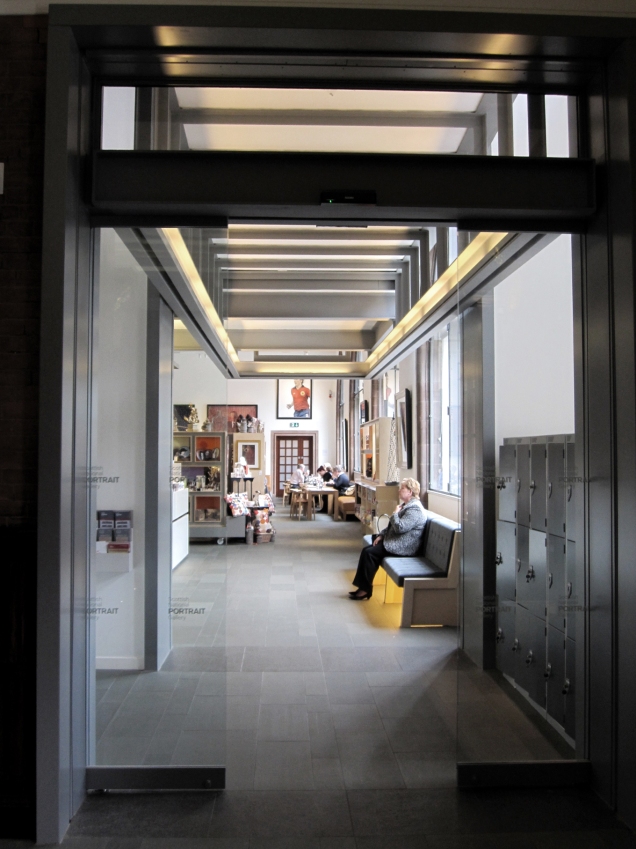 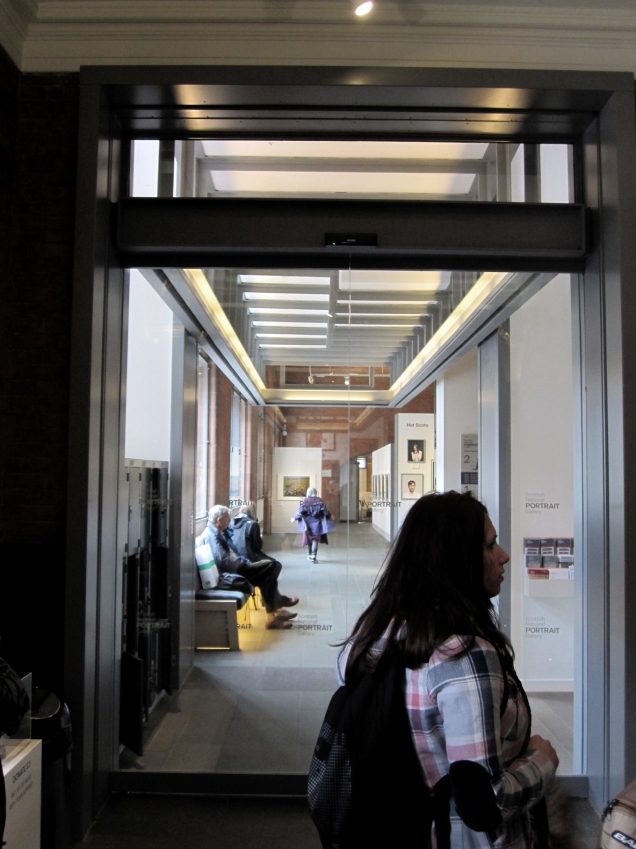 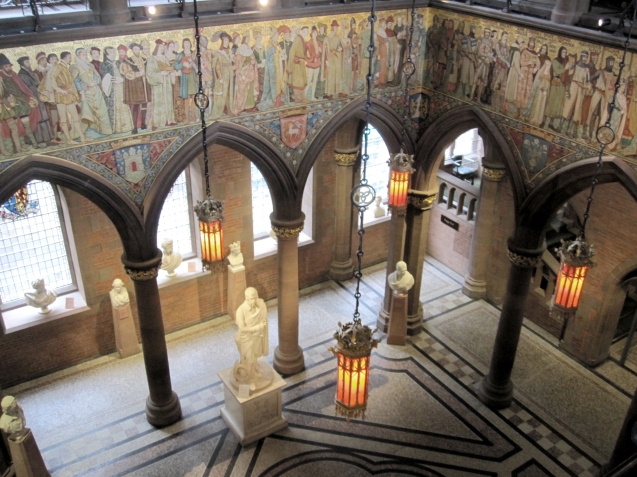 Glass Lift
Through into the Contemporary Gallery in the eastern wing, a glass lift transports visitors across all three levels. Like being in Damien Hirst’s ‘Mother and Child’, the anatomy of the building is gradually revealed giving visitors glimpses of the galleries as the lift splices the floorplates and glides between floors. The original staircases can be accessed either side of the Great Hall but taking the lift directly to the topmost floor gives the opportunity for visitors to leisurely descend through the galleries.

The topmost floor generally houses collections of old paintings. Making the best use of the walls and toplight in both eastern and western galleries, visitors are able to absorb these paintings in a more rational and traditional manner. 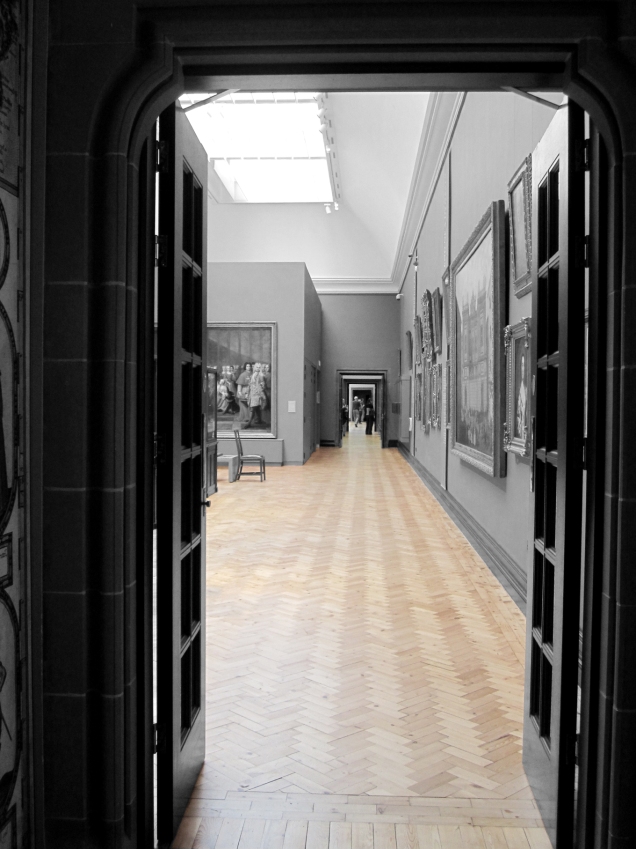 Opening up of the galleries has meant that there is clarity in circumnavigating across the top floor, unifying the the eastern, central and western galleries. Circulation is predominantly along the perimeter.

The first floor galleries are essentially divided into two parts. The eastern galleries house more contemporary collections whilst the western half of the floor hold light-sensitive collections as well as a library. Descending down the existing staircases, the visitor is free to roam the eastern galleries. The displays are more ‘loosely’ arranged than that of the second floor exhibits which are better viewed with toplight. Existing giant iron beams spanning across the galleries begin to tell the story of an innovative and industrious past upon which the contemporary exhibits are hung from. 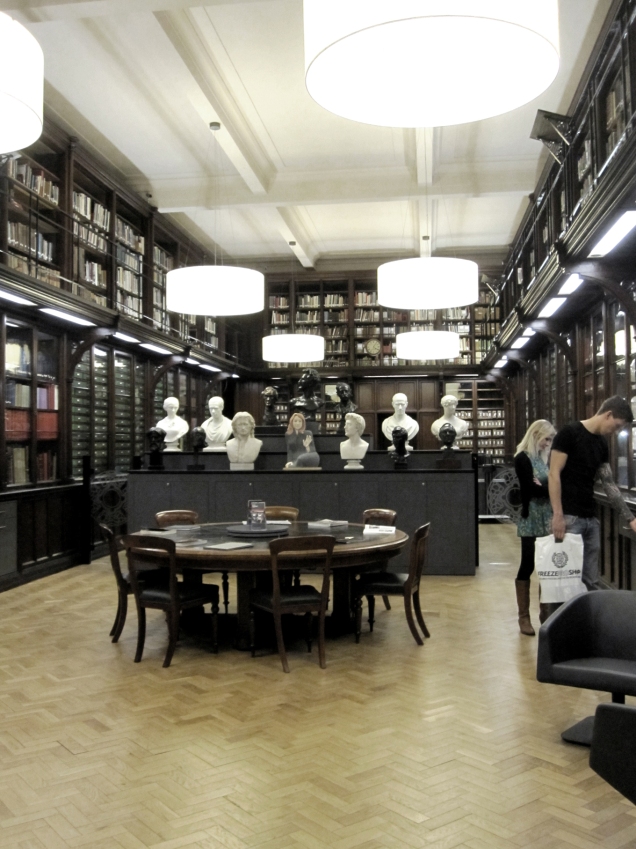 On this floor and within the western galleries, light sensitive collections (e.g. photography) are exhibited as well as housing a library (previously located on the second floor) which is a must see. Beautifully crafted, one would want it in their own home!

Down the the ground floor, the visitor can finish off at the contemporary gallery on the eastern wing or move on to the shop and cafe on the western half of the building. 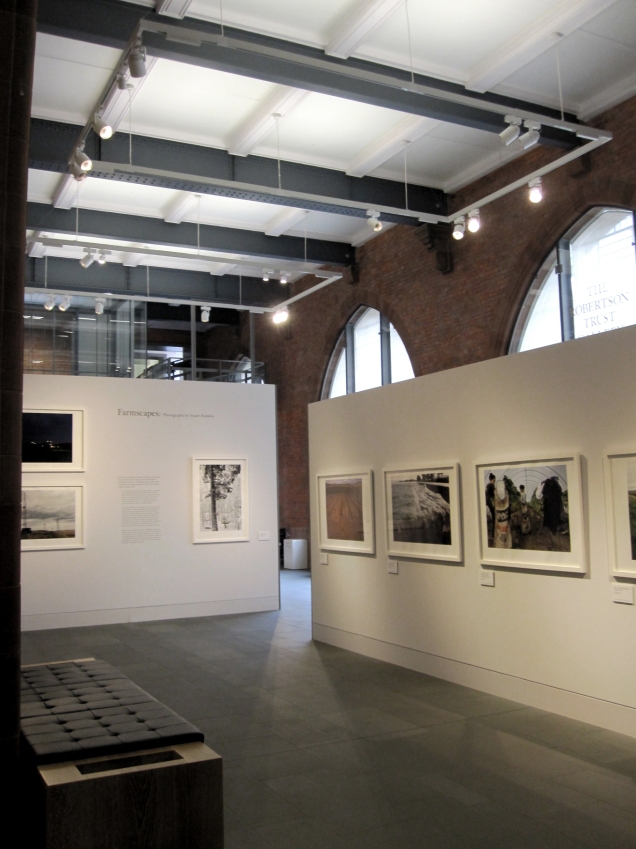 The contemporary gallery in a way sums up the ‘avant garde’ nature of the building when it was built through exposed brickwork and hefty iron beams; one which is quite ‘alien’ to its context yet has the strength and conviction in making a bold architectural statement. 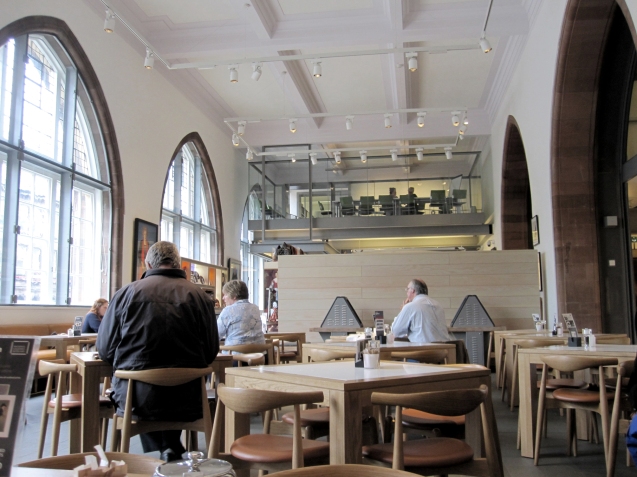 SNPG Cafe with staff meeting room at mezzanine level beyond

Straddling across both halves of the ground floor, a mezzanine level hovers above part of the eastern and western portions housing support and staff services for the galleries. The staff spaces are quite open and in a sense plays upon the exhibitionism of the galleries itself, an interchange between the subject and object, the viewer and the viewee. Although exposed in places, the relationship between the support spaces and the public areas do not detract from one another. Both function well independently and in a sense becomes the ‘backdrop’ to one another.

Tucked under the meeting room is the information desk with the servery sitting under the staff offices. The cafe itself becomes an extended gallery space with a giant portrait of a young Kenny Dalglish greeting visitors as they take their seats! 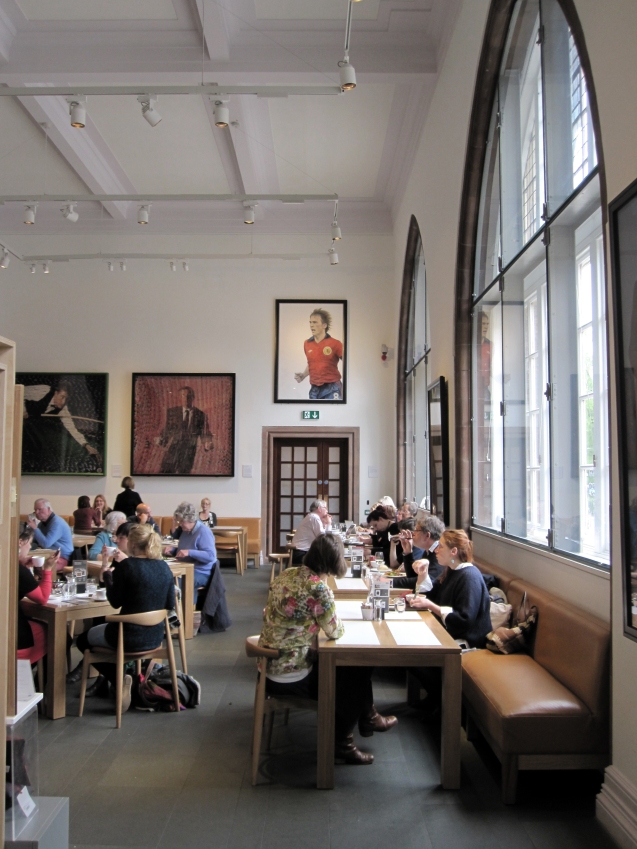 The Scottish National Portrait Gallery embodies the strength and conviction in search of a truer form of architecture that is more Scottish at the heart of Edinburgh New Town. Styled in Neo-Gothic using red Dumfriesshire sandstone and exposing brickwork as well as heavy and musculine beams internally, Rowand Anderson’s building sits in striking contrast to the classically styled buildings predominantly dressed in Craigleith sandstone. Among other things, the latest refurbishment has done three fundamental things.

Secondly, it has rationalised the internal spaces to fit the single ownership of the galleries and treat the building as one entity. Previously, the building was split between the galleries and the Museum of Scotland. This was a major task which was carried out exceptionally well and as a result has given clarity to the circulation as well as improved gallery spaces leading to better curation of the collections.

Finally, it has extended the spirit of the building through to the present day via contemporary interventions. A good example being the playful nature of the steel ‘ribs’ which cradle the mezzanine level within the ground floor. Rowand Anderson’s large iron beams in the eastern wing are carried through into the western wing but interpreted with a similar confidence and use of technology of the time.

It is a fitting tribute to the original design and at the same time define a contemporary philosophy to working with existing buildings and architectural conservation.